Surprisingly, I have never had a taste for any form of anime. Whenever I would try to watch it or play games based on animes, my attention would slip away like a stick of butter in a wet hand. But Persona 5 is a game that kept both my ears and eyes on alert because the animated scenes within the game resemble a anime at its most flourishing. Past Persona games have even launched an animated series.

It’s not that I haven’t heard about the series over the years. People that continuously told me about the game. Before I even started up the game on the PlayStation, my friends quickly said, “The game is awesome, Kim” or, “Oh yeah, you’re definitely gonna enjoy Persona 5.” In the end, none of them were wrong. I’ve been hypnotized by the story, entranced by the music, and enthralled by each and every character. I’m on the brink of buying merchandise at this point.

In Persona 5, you play as a person known primarily at the protagonist, a tall, black-haired high school student with a criminal record. Despite the bad rumors being spread about him due to his past incidents with society, the protagonist has good intentions, along with certain powers and secret access to the metaverse. Within the metaverse, you can traverse the cognitive worlds created by the distorted hearts of the people around you. These cognitive worlds are known as palaces, and within them, the creator of that distorted world has a shadow version of him or herself which reflects who they think they are. The hardships that you go through and the rebellion that builds up inside of you allow you to awaken your persona, the person you really are. 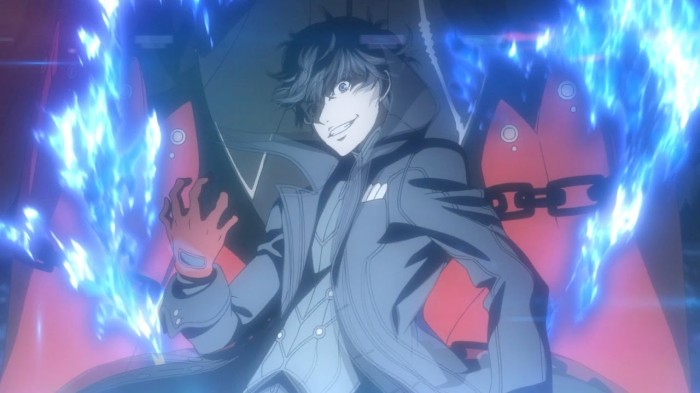 With the knowledge of the metaverse and the sheer power of your persona, you have the ability to change people’s distorted hearts. With the new bonds you make and the power within your newfound abilities, you create the Phantom Thieves of Heart – a group of anonymous people that seek out the evil in rotten adults. You can force them to have a change of heart and confess their crimes, through their own mouths. The “evil” within people causes them to abuse children for their own needs, taking advantage of children for money and drugs, among other things. It seems justified to use your power to make these people admit their crimes.

The story of the game is told through various cutscenes and dialogue, and you progress through the story by defeating palaces. Within those palaces, you take on shadows through smooth RPG-style gameplay. The unique enemies you fight range from pixies to full-blown gods. In ambushes, you seek out the foes’ weaknesses in the battle to make the fight end more quickly, similar to the gameplay in Pokemon. In a fight, you can call upon your persona and use different elemental abilities to aid you in the fight. You must use all your turns and powers strategically and effectively in order to bring the enemies in the cognitive world to their knees. If you were to die in the metaverse, you would die in the real world. That is the risk of altering the inner depths of someone’s mind and heart.

What really makes Persona 5 unique is that you must balance your secret crime-fighting ways, school life, and social life, while trying to stay out of trouble (since you’re on probation). I felt like I was actually going to school every day when the main character would rush to the train and be called on during class to answer questions. You are not obligated to focus on working as a Phantom Thief; you have schoolwork, exams to study for, and if you have the time, friends to hang out with and people to date. Strangely enough, you don’t have to date the girls that attend your school; you can date someone older. By “older” I mean grown women who have already finished college and have paychecks much higher than your allowance.You can even date your teacher, who just so happens to have a part-time job as a maid! I’m not too familiar with the laws of Japan, but the protagonist is a just in the 10th grade.

The bonds that you make with the people around you give you more strength as a persona user and allow you to make even stronger personas through fusions and executions. The way you distribute abilities and reflect your Persona’s power can turn the tide of a battle.

The stylization and design within Persona 5, as well as the music, is what forcefully snagged my heart, making me like the game so much. To give you an example, the Gatekeeper boss music was playing through my headphones so loudly that someone asked if I liked rock. My brain is solely fixated on the violin and the various moods emitting from the electric guitar. The characters you encounter in the game are unforgettable and all have backstories that lead them to bond with the main character and wield their own personas.

I sometimes wish I had a group of friends that awesome. Whether we hold a palace or not, there is a little rebel inside us all that shows who we really are. However, we can only guess what our persona will be like.

One thought on “The Moments: When Persona 5 Made Our 15 Year Old Intern Love Anime”