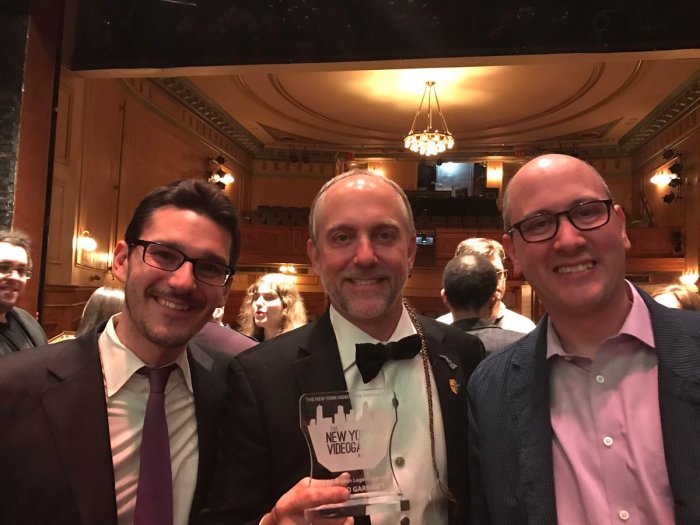 I really love this time of year! But it’s for a different reason than you may immediately gather. This is the season when the New York Videogame Critics Circle works with Comedy Central’s The Daily Show with Trevor Noah to create humor for our New York Game Awards.

We’re happy to announce that The Daily Show‘s Devin Delliquanti will host our New York Game Awards on January 24th, 2018. Last January 19th, Devin killed it with a taut mix of political humor and videogame comedy. Devin knows games really well, so he’s a terrific choice for the hosting duties. I know you’ll love his work when you witness his comedy in person at the Abrons Playhouse or on our Twitch Stream.

Joining Devin with writing duties and with an appearance onstage is The Daily Show senior writer Daniel Radosh. Daniel has graciously MC’d our New York Game Awards in the past, and he once appeared onstage as a box from Hideo Kojima’s Metal Gear Solid series. Liberty Crossing, Radosh’s new comedy series for Verizon’s Go90, begins streaming this winter.

Each December, The Daily Show writers meet with three or four members of the New York Videogame Critics Circle to discuss – and satirize – the year’s game news. We hold court at a well-known restaurant on the Lower East Side, have dinner, and imbibe a little. Each Circle critic is ready with a list of the year’s top games news, news that’s worthy of lampooning.

By the end of the dinner, as Devin and Daniel riff and create humor on the spot, we have a rough outline of who’ll be roasted and what will be parodied at the New York Game Awards. And it all proceeds from there.

We love videogames, that’s been a given throughout these past seven years of awards, mentoring and scholarships. But we love humor, too, so get ready to laugh on the night of January 24th, 2018! And by the way, tickets are going fast! So do get them now to avoid disappointment.

Author and journalist Harold Goldberg is the Founder of the New York Videogame Critics Circle and The New York Game Awards.