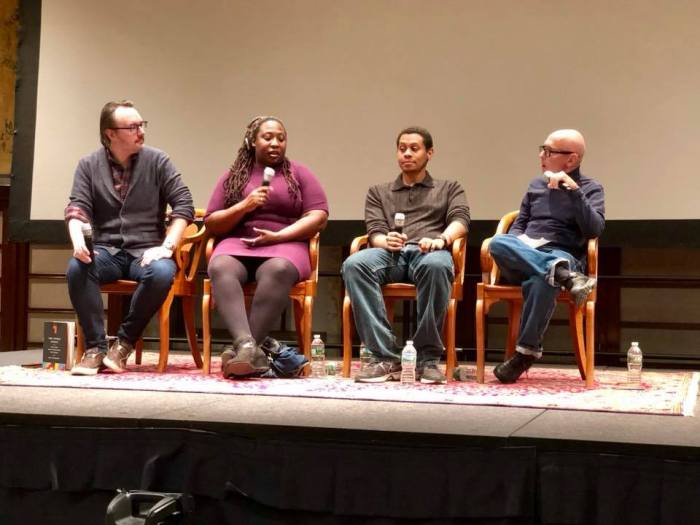 This past Saturday, the New York Videogame Critics Circle partnered with the New York Public Library for its International Games Day event. Our lively panel discussion took place at the Celeste Bartos Forum, the grand Beaux Arts space with its 30-foot saucer dome, housed in the library’s main branch on 42nd Street.

For someone who’s attended events at the Forum named for a well-known philanthropist, it was exciting indeed. In fact, it was a dream of mine. The Celeste Bartos Forum has been site of spirited talks for decades by everyone from Umberto Eco to Trevor Noah to Margaret Atwood. Joining me in a panel discussion about the Best Games of the Year were CNET’s Dan Ackerman, Tom’s Guide’s Sherri Smith and Geek.com’s Jordan Minor.

The crowd ranged from adults to children, all eager listeners, and we gave them a sneak peek of what may well be the games of the year nominees for the New York Game Awards ceremony on January 24, 2018.

The kids had the most poignant questions. After a discussion of the frightening Resident Evil 7 and the very difficult but wondrously animated Cuphead, someone asked us, “Do you like horror games or hard games better?” I said I liked horror better especially if the horror wasn’t too in my face and there weren’t too many jump scares. Jordan Minor indicated that accomplishments in hard games aren’t that really badges of honor for him. They’re overrated. Another person in the audience talked about his appreciation for Borderlands, and Sherri Smith waxed poetic on the game’s nuances and characters. Yet another asked about how we started our careers.

Later, Dan Ackerman talked about his well-written Tetris tome, “The Tetris Effect” and kindly left a copy at the book table bear the door. There was talk about eSports and the best League of Legends teams. I gave away three copies of my book, “The League of Legends Experience.” A girl of about 12 even asked for me an autograph.

This is the second event the New York Videogame Critics Circle has done with the New York Public Library. We’ve enjoyed each one immensely. We aren’t paid for this; we wouldn’t think of accepting money.

The Circle is an organization that’s about much more than giving out game of the year Awards. The core of our mission is to give back to the community — and we can’t think of a better way than to foster literacy, appreciate the best games writing and talk about writing jobs in games and journalism.

It’s not just a gift to the adults and kids in the crowd. In this season of giving, it’s a rare gift for us as well.

Harold Goldberg is an author/journalist who’s the Founder of the New York Videogame Critics Circle.