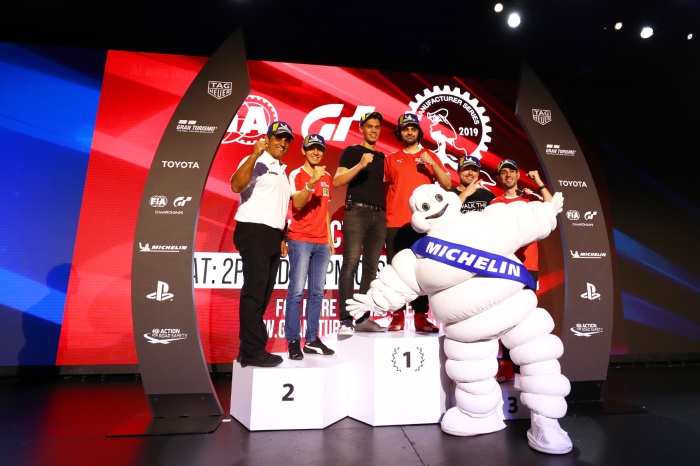 I’m someone who loves games. But since I’m new to sports games, it surprised me that Gran Turismo is one of the most popular racing games in the world. Gran Turismo Sport sold over 8 million, but the whole series has sold over 80 million copies worldwide. So I was excited to attend the FIA Certified Gran Turismo Championship Series where I got to meet many of the talented racers that take part in the GTS races.

The day started out with me arriving at the media check in and heading inside to listen to the press conference that took place. Kazunori Yamauchi, creator of Gran Turismo, and Scott Clark, executive vice president of Michelin Tires (or ‘Tyres’ in the original French), were live in PlayStation Theatre to announce a new partnership between the GT franchise and the 130 year old company. Michelin not only produces tires for personal vehicles, it also makes some of the best racing tires known to the world. The two talked about wanting to share the love of cars and driving with the world in both tires and gaming, and they said their shared passion made the partnership feel natural and hopeful.

After the press conference, the Pro-Am Race began. However, I unfortunately was not a part of that. I hadn’t practiced at all beforehand due to time constraints and the only Gran Turismo game I ever played was on a Playstation 2 some time before the PlayStation 3 was released. I still got to watch the race as other very practiced Amateurs challenged each other and even got the chance to race with famous Colombian Racer Juan Pablo Montoya, the 43 year old Colombian-American who drives for Acura Team Penske in the WeatherTech SportsCar Championship. However, even Montoya was no match for the young GT pros. When they all took the wheel, the race really took off to new heights.

After the Pro-Am race, I got to have a solo training session with a former pro named JT, where I learned the basics of GTS and how it feels to get behind the wheel of this game. Needless to say, it was an experience seeing as how I’ve never played a racing game that was realistic enough to feel like an actual car. The steering carries the speed and weight of the car you drive, and you’ll start to spin and slide if you go off the paved road. It feels real.

JT also informed me of a program he had taken part in called GT Academy, where in Gran Turismo partnered with Nissan in order to train young drivers in both the game and actual racing. Ever since 2008, a select group of racers are chosen each year and trained in the mechanics of the game and learn everything they can in order to race. After that, they’re taken to an actual racing tracks and are put behind the wheels of real-life Nissan cars. What ensues is a race between gamers turned pro racers as they all race to see who can win and become a real world racer based on what they’ve learned.

After the training session with JT, I got to experience the Pro racers go at it in the Qualifier races. It was much faster and more intense than the Pro-Am race, as each of the pros try their hardest to qualify for the next race in the Grand Tour. They all drive with a sense of intent and passion, even more so than in the Pro-Am, and pull off moves that only the Pros can do. As they followed the slipstreams of other cars, pushing past others with a quick pedal to the metal, barely scraping the edge of the track to ease through a tight turn, I was stunned at how precise their driving was. It’s no wonder GT treats its racers well: they deserve it.

After the races at PlayStation Theatre, the attendants, the racers, and I were all led out to the Intercontinental Hotel and onto a bus heading to Chelsea Piers. We all boarded the Atlantica Yacht and embarked on a nice cruise around Manhattan. There, I got to have a couple of talks with some of the racers and noted some good bits and pieces of information from them. Most of these racers have been following the GT franchise for more than 10 years and are extremely dedicated. GT has always been known for its realism when it comes to simulation racing, and factors such as tire traction, understeering (when a car doesn’t turn as sharply as intended), and drifting all come into play when a race goes down. It’s the realism and the competition that keep the esports Pros coming back for me.

Whenever I would spot a group of them talking, it would mostly be about the races they had finished and what they thought they could improve upon. Some talked about wanting to improve their lap time in the next race by a few seconds. In a race, if you have a lap time that’s a split second above someone else’s, it could push you to the top five, or even make you a champion.

On Sunday, Brazil’s Igor Fraga, the veteran who’s been playing the game since age four (see video below), became the New York Nations Cup Champion. Mikail Hizal from Germany found himself in second place and Coque López from Spain came in third.

Gran Turismo Sport isn’t the game I thought it was. Before this, I was under the impression that it was just another racing game like Electronic Arts’ Need for Speed. I was sorely mistaken, as Gran Turismo is actually a highly competitive and intensely realistic racing sim with tons of dedicated young minds putting their best into winning races. With the right support, I feel it’s an esports series that might someday become as popular as NASCAR is today.