There is always that one game that you play that completely changes your perspective on life. It changes your attitude, your demeanor and even what you tend to value. It makes me feel that it’s the little things in the world that make you happy. This game is called Astro Bot Rescue Mission and it fills me with an undeniable happiness.

The little robots, the Robot Ninjas you met in Playstation Playroom when the PS4 was launched, are on a daring, uplifting, and interactive new adventure, and you just have become a part of it. Gleefully venturing throughout the starry galaxy, a friendly ship -complete with a VR headset and color scheme of its own – cruises around with its crew of over 150 tiny robots partying on top of the ship. Suddenly, a green, monstrous alien stops by and violently shakes the ship, stealing its VR headset. With the headset on, the alien throws an intimidatingly red robotic glare and leaves. With the ship in ruin, the unharmed crew members soar off en masse to the unknown galaxy on the debris of the poor ship. Devastated by this aftermath, the last crew member, the blue caped Astro Bot, swears to help bring the crew and the missing parts of the ship back together. It’s you  who are essential to that plan.

Here is where the game turns into an interactive platform, where you run, jump, hover, and punch your way to victory. In each level, there are eight crew members to find, and one boss fight per world. After defeating one of the Alien’s henchmen, a part of the ship is revealed to you.

What fascinates me so much about this game is how immersive it is. When I put on the PSVR headset, I felt like I really was in a new dimension. I felt like I was one of the robots – and it’s not simply because they are obsessed with VR. It’s because of the visuals and the perspective of seeing your virtual self. You are a sweet, hovering robot. When you get hit with obstacles such as bombs and soccer balls, your PSVR screen cracks, showing you got hit rather hard in your computerized head.

Your awareness of the world around you will benefit Astro Bot and there will always be a moment where you need to utilize your controller to uncover different parts of the world and even use it as a water pistol. There are numerous encounters where you have to bash your head against an object to open a path to progress through the level and encounter some more enemies. Little Astro Bot is the star of the show as he explores the world around him, but that doesn’t mean you’re not crucial to his success in getting the crew back together. In a sense, you are like a big brother or sister as you hover about.

Japan Studio seems to be the reigning champ when it comes to large-scale monsters and boss fights. We had the 16 colossi in Shadow of the Colossus, then Trico in The Last Guardian. Of course with that level of skill, Japan Studio knew how to make some seriously big and bad bosses in Astro Bot Rescue Mission. Each and every boss towers over you and your buddy Astro Bot and each has their own unique attacks. The bird with the aviator hat and goggles swoops down menacingly and aims precisely to peck at Astro Bot while he stands on floating plateaus. As you dodge sharp feathers that zoom past you, you must guide your little robot pal over massive leaves in order to reach the robot bird and smash her goggles into pieces. The first fight is a most memorable one with an autonomous, short-tempered gorilla. It’s the developers being inspired by and paying homage to King Kong’s infamous skyscraper stunts. 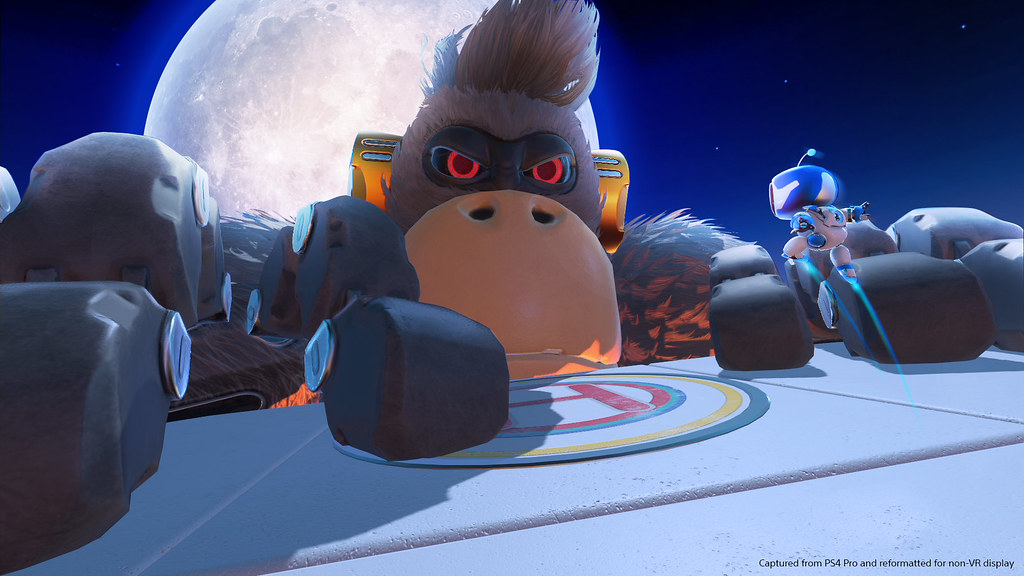 As far as the soundtrack goes, Kenneth M C Young, composer for Astro Bot, is now my favorite person in the world. Prior to his phenomenal work on Astro Bot Rescue Mission, Young has worked on the music of Little Big Planet, Tearaway and Tethered. These games revolve around the sense of creativity, joy, and adventure, and these emotions are portrayed through the music. Funky, upbeat, quirky, and catchy, are all words that can be used to describe how the music sounds. It fits so well with the game’s bizarre bosses, the different settings which awe you, and the robots dance and party pretty hard at the end of each level. Young’s composition for Astro Bot is now at the top of my Playlist for many reasons.

I remember when I first played Astro Bot at the PlayStation Theater this summer. When I attended, there were only two levels I could play and the “tooth fairy” boss fight. I never thought I would fight a giant robotic ape by punching his teeth and yanking out his pearly whites by the metal roots. I’ve said in the past that Japan Studio has never disappointed me, and with the release of the full game, that statement still stays true.