It was a day that we were all waiting for: on Tuesday, it happened. Nintendo of America President Reggie Fils-Aime visited the DreamYard Preparatory School, the school at which the New York Videogame Critics Circle mentors and teaches courses in the Bronx.

In a packed room filled with DreamYard students and educators, Reggie gave an insightful speech about pathways into the games industry that at first focused upon his roots in the Bronx. “I grew up literally a mile from here,” he said. He also talked about the need for diversity in the games industry, rising in the corporate world after his family came to the U.S. as Haitian immigrants, and the varied jobs available at Nintendo from art to accounting to writing – jobs that are beyond coding.

Reggie also detailed his five principles for success, and the one that resonated with me and with many students was “It’s Not Easy.” Reggie explained that he doesn’t believe in luck, just hard work. As an example: he recounted the story of being a young basketball player. He thought he had the skills to make his school’s team, but at first he didn’t make the cut – even though it was close. Then, he went to work, practicing as much as he could. He was so dedicated, he overcame his difficulties and became part of the team.

The students hung on his every word, and Fils-Aime seemed to be very much enjoying his time with them as well. You could see the delight on everyone’s faces when he told some tales of Mario and Zelda creator Shigeru Miyamoto. These were really magical moments for an underserved community in the poorest Congressional district in the United States.

After taking questions, Reggie signed autographs and posed for selfies. Then, he played Mario Tennis Aces with senior intern Kimari Rennis, and our (DreamYard graduate) interns from our satellite locations at Lehman College and City Tech College, Isaac Espinosa and Ronald Gordon. 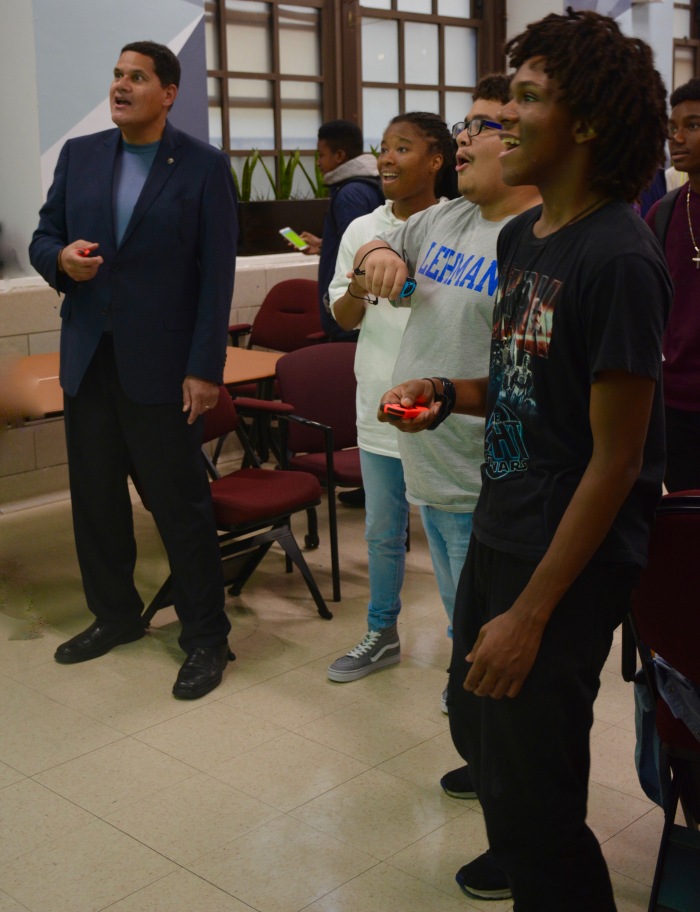 The Swing Mode match was a tense and exciting affair which was so close that it went on beyond the Reggie’s appointed time to leave. Back and forth from advantage to tie it went. Finally, the team of Rennis and Fils-Aime pulled off the victory.

The New York Videogame Critics Circle wants to thank Nintendo for making this happen for our kids. It was a once in a lifetime experience and was all over too soon. But the students, armed with knowledge, anecdotes and autographs, will remember the day they met Reggie Fils-Aime for years to come. That time Reggie came to school.

Author/journalist Harold Goldberg is the founder of the New York Videogame Critics Circle and the New York Game Awards.