Is it amazing fun or mere glitz that gets in your way? This week, Electronic Arts is holding an Open Beta for players to try out their upcoming World War-inspired II first-person shooter, Battlefield V. I was pleased to hear last week that the game was delayed from mid-October to mid-November for several reasons. Not only will Battlefield V avoid being sandwiched between behemoths such as Call of Duty: Black Ops 4 and Red Dead Redemption 2, this delay will give them time to fine tune the game as well as fix some glaring bugs.

Make no mistake: this game is an absolute visual delight. Booting the Beta up on my very competent PC rig, with all the settings turned up to the max, had me in awe. Buildings crumble piece by piece, dirt and debris fills the air, textures that don’t need a second to pop in; this is how modern shooters should look. The two maps in the Beta are Rotterdam, a Dutch city that has not yet been torn down by Axis forces, and Arctic Fjord, a Norwegian landscape that reminds me of some of my favorite snow covered maps from Battlefield’s past. While I enjoyed my time fighting through city streets in Rotterdam, it felt too similar to maps from 2016’s Battlefield 1. That’s not to say it’s a bad map, but I would have preferred a little more variety. The same familiarity could be said about Arctic Fjord, yet this map dealt with vertical play in an interesting way. Placing capture points on an elevated train track meant having to skirt around tight areas avoiding enemy gunfire, as well as worry about falling to your death.

A huge improvement has been made to the way the guns feel and shoot. A major turn off for me in Battlefield 1 was how clunky the guns felt. It was as if I was shooting a broken paintball gun that only shot straight 50% of the time. In Battlefield V, shooting feels tight and responsive. My hits were connecting and I never felt cheated out of a kill. While developers DICE have improved the feel of the guns, they seemed to regress when it came to the user interface for class creation. They stripped away many of the menu options from previous Battlefield games, requiring me to go in and out of excessive menus and tabs to look through guns in the middle of a match.

This isn’t the only area where UI is an issue. Overall they seem to be sticking to this minimalistic design that I believe is very detrimental. Gun unlocks and progression just aren’t made clear. There aren’t many indications as to how I acquire certain attachments and upgrades. While these could be missing because of its Beta status, even two years after Battlefield 1’s launch I’m still as lost in those menus, so I don’t really see Battlefield V changing much in this department. 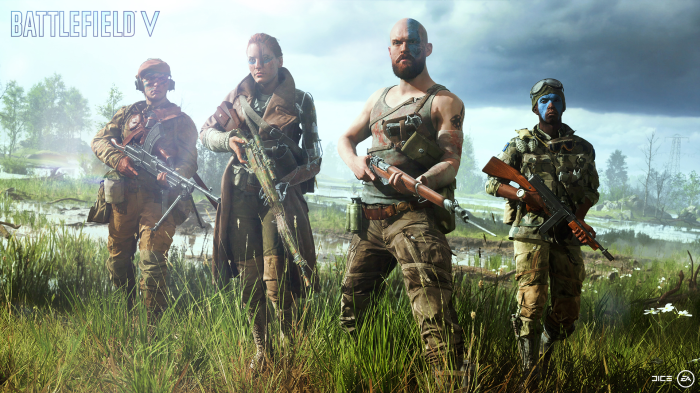 The biggest change in this entry is how everything happens in real time and with the players own hands – to make the game feel more realistic and tactile. You won’t automatically regenerate your health, you’ll need to apply medkits to bandage yourself up. Walking over ammo crates no longer magically refills your clip, you need to actually pick them up if you want more ammo.

While I think these are novel systems, they don’t make the experience any more fun. That’s okay if you’re looking for a hardcore World War II shooter, but when I boot up an online FPS, I’m not looking forward to micromanaging a bunch of resources unless the game explicitly has RPG systems in place, like a Destiny or Division. You’re almost guaranteed to run out of ammo after two enemy encounters, which either has you dying as you attempt to shoot an empty gun at an enemy or running back to your base to restock ammo. The animation for picking up an ammo pack is a little jarring as well. Mid-gunfight, a teammate would toss a pack at me causing my character to hold it up to his face for a second – heavily distracting me and making me miss my kill. I could definitely see moments where you’re playing with some friends over party chat, tossing med kits and ammo packs at each other really immersing yourself in the battle, yet playing as a lone wolf these systems just had me frustrated and felt unnecessary.

There also seems to be decision to tone down vehicle play. Battlefield has always separated itself from Call of Duty with its controllable tanks, planes, and boats, so it was odd to see way less of them in this Beta. I’d encounter maybe three tanks per match, a large drop from older Battlefields which would feature several tank battles every ten minutes. While there could be other maps with more vehicles in the full game, the lack of any significant anti-tank weaponry from the start has me thinking that they truly are focusing less on this type of gameplay.

Another major change is how the revive system has been reworked drastically. Regardless of your class, you can revive any of your four other squad-mates, while medics can still revive anyone on the entire 32-player team. I think this is a very welcome change yet it comes with a couple of downsides. There seems to be a bug that displays the revive marker over downed team members telling you to revive them, even if you are not a medic class. The game even prompts you to press the button to revive them, but if they aren’t on your squad, pressing the button will do nothing.

This error led to a lot of confusion and a lot of deaths while trying my hardest to revive a teammate. Another issue: when you get knocked down by an enemy the camera wigs out for about two seconds and shifts into third person then back into first person. You then are required to either hold one trigger to slowly bleed out while waiting for a medic, or hold the other trigger to also slowly bleed out in order to respawn. This has lead to situations where the time of death to the time of respawn lasted almost twenty seconds. Once again, I am unsure if this is working as intended or a huge oversight. Either way, waiting a long twenty seconds in between lives is not much fun.

Overall, I’m still very lukewarm on Battlefield V’s multiplayer. I really hoped this year we’d see a return to the Bad Company spin-off series which was much more humorous and campy. But alas, we have realism. I found the focus on micromanaging ammo and health to be dull and not as entertaining as the developers intended. While I think these changes will make for a stellar campaign, I’m not a fan of their inclusion on the multiplayer side. Battlefield is at its best when it doesn’t take itself too seriously. Horses riding on tanks, Megalodons in the water? None of that is on display in this Beta. Things can always change between Beta and release. But from I’ve played, I just don’t see the problems that come with realism going away.

Jeffrey Mizrahi is a contributing writer/intern for the New York Videogame Critics Circle. You can find more of his musings pretty much anywhere on the internet @MrBrawl96