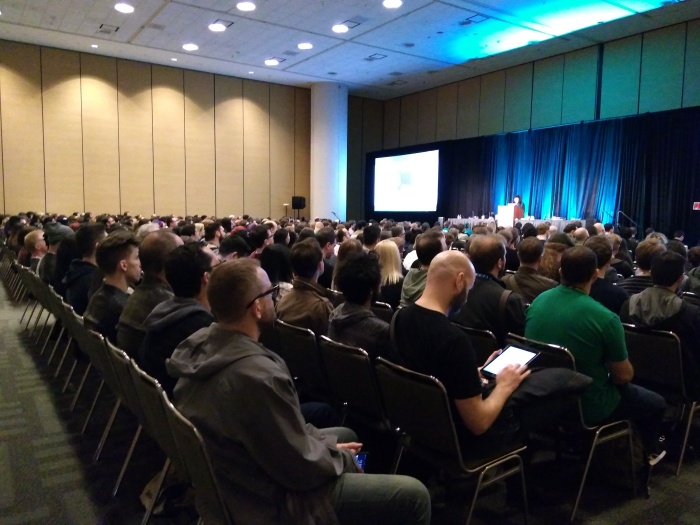 “Each one of us has, somewhere in his heart, the dream to make a living world, a universe.”

This year would be different, I thought. Instead of watching demos from a plethora of games at the Game Developers Conference and dragging by day’s end, I’d check out the education (and narrative) talks instead. I was psyched about the education topics. Years ago, I’d read in the Financial Times that Nobel laureate and former UN Secretary General Kofi Annan said that “Information is liberating. Education is the premise of progress, in every society, in every family.” I wanted that freedom and progress. My head would spin in appreciation as I absorbed a whirling, spark-spitting fireworks of facts and ideas. I’d be smarter for the experience. More importantly, I’d have a better knowledge of how to run the New York Videogame Critics Circle’s education programs.

Take “Game Education Is Global: Contexts and Collaborations.” Each of these educators spoke at length about the history of their school which included why their college was superb standout. I felt the Beach Boys’ “Be True To Your School” should have been playing in the background or before each talk. Most of these four presentations felt more like marketing efforts than an offer of paths to education through games.

Maybe part of the problem was giving each educator only about 10 minutes to say something. That’s not easy for professors who like to talk. So the most I gleaned from this gathering was how Hanli Geyser from Witwatersrand University in South Africa dealt with a country-wide situation in which students were adamantly protesting in order to gain free education. It’s within this difficult milieu that Geyser had to create curricula and teach. The challenge was great. I checked and during this time The New Yorker called the period of protest “violent” and “ongoing.”

It was clear that, if Geyser had spoken mostly about the challenges of teaching in South Africa, the talk would have been more useful. Still, she imparted far more memorable information than the others. I’m sure they’re all at the top of their league in the classroom. At GDC, though, they seemed more like recruiters.

During “Disabilities: Helping Students Survive And Thrive,” Henry Bawden from Columbus State Community College provided anecdotes about students with a variety of disabilities and outlined how they worked within a classroom setting. To me, it was more like, this student has this issue, but he or she was able to overcome it and make a game. The ‘how’ was sadly missing. Still, the fact that students could create and improve through games was salient to me. Anecdotally, one of the DreamYard students who used the game room we donated in the Bronx was on the spectrum. Through playing games with others, he became demonstrably more communicative – quickly.

Lindsay Grace from American University is a professor who’s quite accomplished. His website says he’s authored more than 45 academic articles since 2009. I was excited because his talk looked like it would be full of lessons I could take away and use in our mentoring for students and for workshops for older adults. Who wouldn’t be compelled to attend an event called “Cuba, Nairobi, Borneo, Oh My! Creating Games Education (Very) Abroad”?

But Grace fell into the trap of entertaining the audience with humor. That can work in small doses to keep the audience awake and enthused. (I learned that from the Daily Show’s senior writer Daniel Radosh when he helps out with our New York Game Awards.) But if you employ it too much and you’re not a comic pro, it feels more like a YouTube show.

When Grace showed an elephant interrupting his work with students, it was funny. And it showed he could work under somewhat difficult conditions. At times, he had to teach his students in an old school way – using paper and pencil for game creation. But the talk did not tell me what kind of games the students made and what kind of things the students learned – and how. When Grace introduced a student who had made a sword and sorcery-style side-scroller in Cuba, he didn’t give the designer the floor. I think that was a mistake, especially since the designer’s English was understandable and he clearly had traveled a long way to be in San Francisco.

As an observer trained in journalism and criticism, I felt the educators needed a good editor who would allow them less ego, fewer anecdotes and could elicit more salient information. Or, they could have taken notes from Jesse Schell’s speech called “The Nature of Order in Game Narrative.”

Schell, who makes games, teaches and writes books, used architect Christopher Alexander’s four volumes on patterns to explain how his theories on the nature of order could be used for designing story in games. Schell was hooked on Alexander’s thoughts when working at Disney; he opened up one of the writer’s books and read these words: “Each one of us has, somewhere in his heart, the dream to make a living world, a universe.”

While my gut didn’t agree that every one of Alexander’s ideas could work in games, it was the most educational experience I had at GDC, one that required a lot of work to create and easily reaped the benefits. Looking out into the audience, I could see the awe on their faces as Schell revealed each Alexander theory that could conceivably be used in game making. It wasn’t a perfect talk. But it was close.

Author/journalist Harold Goldberg is the Founder of the New York Videogame Critics Circle.