By Shane Ferguson
You may have missed it, but that would be a shame. Rogue Aces is incredibly addictive, a 2D, side-scrolling free roam air combat shmup arcade game. While that’s a lot of adjectives, it’s a game that’s nuanced and intriguing. Developed by Infinite State Games, Rogue Aces is a spiritual successor to classics such as Wings of Fury. You battle waves of enemies in land, sea and air combat in a campaign of randomly generated missions. There’s barely any load time and that makes the action and pace exciting from lift off to finale.
Rogue Aces has a lot of tricks up its sleeve and then some. When you join the Rogue Aces, you have three planes left in your whole squadron, and you’re the only pilot. Your orders? “Just pop out and win a war for us would you, old chap?” That’s all the direction you need going into this game. Like the arcade games of yesteryear, Rogue Aces throws you right into the action without doing much in terms of story. There is a short tutorial; however, it doesn’t even scratch the surface when it comes to useful tips. This forces exploration and discovery moments much like those I had as a kid playing video games before the internet was in everyday use.
Hours into my playtime I found myself still discovering new things Rogue Aces had to offer. This ranged from game modes to game mechanics. The more you play, the better you get and the more you ultimately unlock. I can’t stress how refreshing it is to be rewarded for mastering a game in the modern days of DLCs. Usually you have to purchase new levels and abilities. In Rogue Aces, you just play for them and I’m still getting used to that being a thing of the past.
This highlights what I believe is the most important aspects of a videogame, fun and replayability. This game has permadeath, so if your pilot dies or crashes his plane without ejecting, it’s game over. Even if you have additional planes left, you need to keep your pilot alive. Since the missions are randomly generated, there are no do-overs.
There’s an XP system that you can use to upgrade your plane’s abilities. You can also use this system to see where you rank overall in the online leaderboards. Rogue Aces has a perfect blend of challenge and complexity. Your plane is armed with one main gun with unlimited ammo, a few falling bombs, limited rockets and some fuel. As you embark, your random missions will increase in scale, difficulty, and strategy. The style of play is arcade so you can play at whatever pace suits you.
You complete the campaign once you complete 100 of these generated missions. You start out with one, long open world map, You will need to take over an enemy outpost in order to refuel and extend your distance of travel. If you find yourself out of fuel or in a severely damaged aircraft, you can eject by double tapping a button. Don’t worry about the enemies below, your pilot is equipped with unlimited grenades to obliterate anything in his path to make a safe parachute landing. This is what I mean when I refer to some of the tricks Rogue Aces has up its sleeve. You can even air hijack other planes if you time and position an eject just right. It’s really cool to do but a desperate move I’d only attempt in the campaign if I had to. You only have three planes to complete the game, so this move can either extend your session or cost you a life. 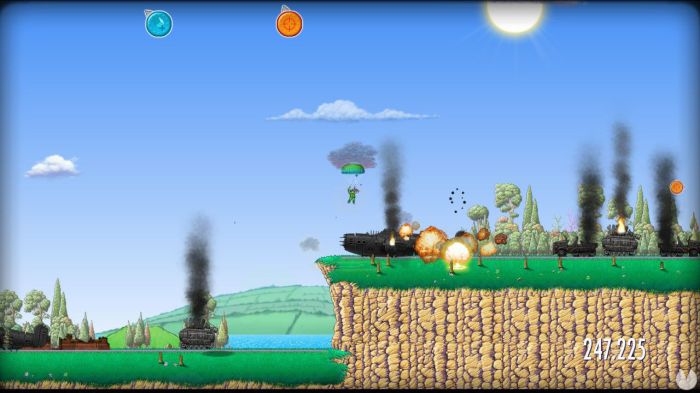 Once you get over the learning curve, you might find the normal campaign a bit less challenging. Luckily, there are a plethora of game modes including a grueling Veteran’s Campaign. Along with much tougher enemies and missions, you will have to manually control many of your plane’s functions including landing. There is also the Frontline Campaign mode, a map-based time attack mode where you take on an island’s worth of objectives. A survival and arcade mode adds a whole new element to the already addictive gameplay. In addition, there’s a “TOP SECRET” Bomber’s Defense mode in the game’s credits — if you manage to find it. This mode is similar to survival, except you pilot a more heavily armed, flying cruiser warplane.
When you purchase Rogue Aces on PlayStation 4, it also comes with the PS Vita version, perfect for mobile play. It’s one of those games you can easily lose hours in while on a long trip. I didn’t notice any major differences in the Vita port, other than it being slightly more attractive. The cartoon style and saturation really pop on my PCH-1000 screen. The cross-platform integration makes its $12.99 price more than reasonable. I wish more of the smaller indie games in the PS Store came with mobile Vita ports. When it comes to arcade games on home consoles, it seems only right. Not to mention, I’ll look for any excuse to use my Vita at this point.
To me, Rogue Aces is the gold standard when it comes to roguelite games and makes its spiritual predecessors proud. It’s a game I can definitely see myself coming back to again and again. If I had to nitpick I’d improve on some of the sound effects including plane engines, gunfire and explosions. I also feel like an appropriate soundtrack would enhance Rogue Aces setting and personality.  That’ because addictive gameplay needs addictive music to keep you immersed.  Also for the all the modes included, I was surprised to see no multiplayer in Rogue Aces. This isn’t a big deal, just something noticeable enough to mention. If you’re a fan of the genre or just looking for a new mobile game for your Switch or Vita. Rogue Aces is a great hidden gem worth checking out.
Shane Ferguson is a contributing writer for the New York Videogame Critics Circle.