While it has a few issues, UFC 3 is undoubtedly the ultimate fighting simulator of this generation thus far. On the PlayStation 4, its graphical and technical prowess make it a must-have for any UFC mega fan – or casual fan. Skin textures, stadiums and lighting look fantastic, even real at times. The expansive roster of over 230 fighters, in addition to the unpredictability of UFC matches, makes playing with friends an addictive experience. For those newcomers just looking for a fun new title, there’s definitely a worthwhile experience in UFC 3. 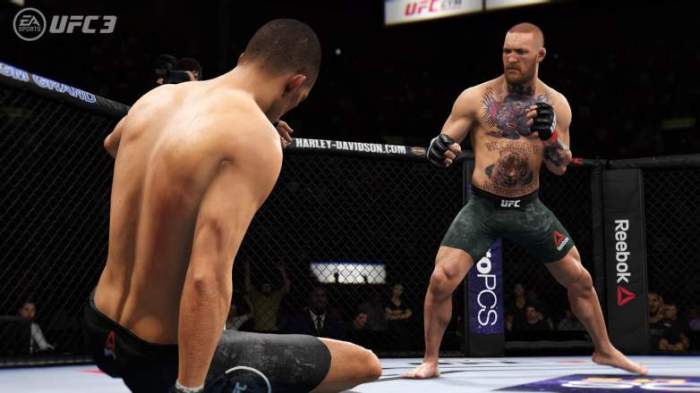 I’ve always felt like for every three steps UFC games take forward, they take two steps back. There’s not much of this is UFC 3 as EA Sports have done a great job at expanding what they’ve established with previous titles. The many ways of fighting are improved and add a much-needed sense of realism to fights. Spamming your buttons will leave you fatigued and open for a match-ending blow. More importantly this year, there’s emphasis on chaining up a correct series of strike combinations. Throwing random attacks will result in a more reasonably sluggish exchange as opposed to say a common jab and cross combination.

Stats have also been improved so things like “Control Time” reflect on the judge’s scorecard. These improvements add a layer of strategy to UFC 3 and will force you to be a smarter fighter. Even on normal difficulty, I had to submit to the game’s new system or be punished every time.

This is great when it comes to the striking portion of the game, but we know mixed martial arts is about way more than just kickboxing. This is where UFC 3 begins its downward descent. For all the attention shown to improving striking mechanics, other elements of the game seem to remain generally unchanged. UFC 3 will at times stop the action in order to explain (sometimes with six pages worth of on-screen hints) how the mechanics of grappling and submission should work. Yet the result can still come off highly convoluted. Aside from that, practicing feels like a separate tedious and mechanical mini-game chore. If this wasn’t frustrating enough, beating the CPU at this chore can feel impossible at times – especially if grappling and submissions happen to be that particular fighter’s specialty. I found myself just trying to avoid it altogether and I can’t recall grabbing a submission victory in my entire playthrough. This is a big deal once you consider grappling and submissions are two-thirds of a UFC fight. I also found that winning a match once in top mount was extremely easy and I’d assume this could be exploited in online play.

The presentation is impressive, partially because signature entrances and animations help the game feel like you’re watching a real UFC fight. The commentary is decent, but doesn’t add any element of excitement to big matches. And it can get repetitive fast. The soundtrack is compelling as far as playlists go – but the music can feel out of place at times.

This year they’ve added “Knockout Mode” with commentary from none other than Snoop Dogg. This mode is possibly my favorite part of the game and worth it for Snoop’s hilarious commentary alone. Career mode is pretty much the same as in the previous edition and doesn’t really provide much spectacle. Minor cutscenes and a few two-minute clips of Dana White talking can get boring fast. They do, however, let you choose how to spend your time during training camp. Everything from sparring to learning new techniques to badmouthing your upcoming opponent on social media is possible. This would be cooler if they actually added a few customizable options that allow you to create some of your own rivalries.

EA Sports also brings “Ultimate Team” to UFC 3. You might find it rewarding if you’re a fan of EA Sports Ultimate Team modes a la Madden. Personally, I found it inconsequential. I’m not the biggest fan of loot boxes or micro transactions anyway. Thankfully, they have kept this confined to this mode and it doesn’t affect other modes or elements of play.  Online play in my experience is pretty solid with very minimal lag. Along with local versus matches  online play will probably be the majority of UFC 3’s replay value for most players. This is a great party game online and you will lose hours fighting with your friends.

UFC 3 has a massive roster, multiple game modes and tons of replay-ability. Despite some of its shortcomings, it’s definitely a must grab for any UFC fan. Those who long for a new EA Sports Fight Night might also love this game for its improved striking system. It’s a great fighting game that can feel rewarding once you master it. We’re still a long way from the fluidity that comes from real MMA fights but this is EA’s best swing so far.