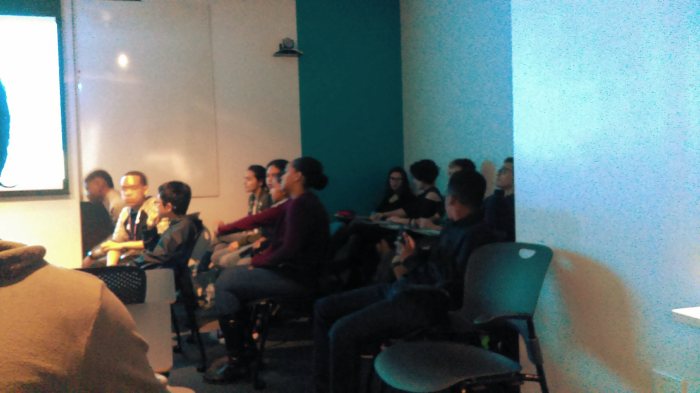 On Saturday, I took an umbrella to the heavy rain and traveled to NYU’s Game Center where a large group of college seniors were celebrating their imminent graduations and the occasionally dismal reality that is the real world.

But in a small room farther away from the festivities, about 15 high school students were unveiling their first games. The feeling in that room? Electric.

The NYU Future Gamers program, which is open to all high schools student for free via an application process, had three NYU grads who mentored the kids. Over the course of 12 weeks, the students learned game design. And they discussed cultural issues that were presented to them via games. The mentors guided the freshmen, sophomores and juniors carefully through the difficulties of making code, artwork and story for the five games that were featured. “Programming is hard — especially for teenagers,” said one of the students.

Their ideas were generally compelling as well. Clapout uses the idea of hands clapping which guides players through a house that has lost its power and the rooms had gone black. The makers wanted to add a mystery element, but due to time constraints, they went for straight out gameplay over narrative.

Run Bun Bun, which had the best title of the five, sees rabbits hunting for carrots and was made by two girls who admitted that they disagreed about the original premise. Ultimately, they compromised to make the game (which is really what teamwork is all about – compromise in an effort to move forward).  They eventually want to add an Evil Bunny to the code.

Departure, another effort, provides a riff on old school adventure games. But the premise, about losing people you love, was very much here and now. It features pixel art, which proved to be a challenge for the game makers because “it has its limits.”

Feeling the Air was inspired by Nintendo’s Super Smash Bros., but its primary feature is fighting in the air. The three-person team used Gamemaker Studio for their project, a mod of C++.

Beyond the games, the students learned the value of working together on a tight schedule to see a project through to fruition. As the kids stepped forward to pick up their graduation certificates, the audience heard a kind of teen giggling, laughter that was mix of pride and nervousness and accomplishment. 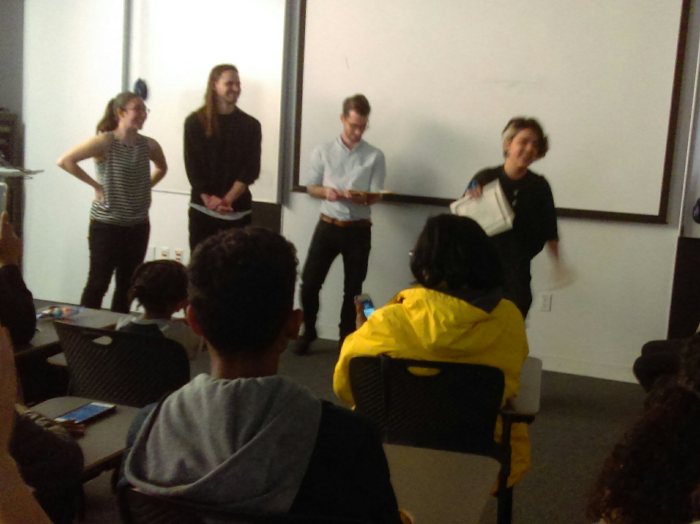 I attended the event in the hopes of suggesting the NYU program to the students we mentor through the New York Videogame Critics Circle – if it was good. After seeing what I saw, I couldn’t recommend the program more highly. Yes, the presentation needed handouts detailing each game and an easier-to-find room. But overall, the vibe was right. It brought the bright sunshine of accomplishment on a day of terrible weather.