In this long form piece, our writer Sarah Awad looks at the role of female characters in video games- the good, the bad and the ugly.

Ten minutes to midnight, as a suburban town lies dormant in the dead of night, Sarah, the protagonist, enters her home with a soft shut of the door.  A well-bodied thirty-something clad in jeans and a t-shirt, she schleps into the living room, exhausted and concerned as she debates with her business partner on the cell phone. “I can’t lose this job!” she warns, as if work has been slow, as if ends are barely meeting for her.  She sighs as she speaks. As a single mother caring for a twelve-year-old, her distress over this job appears pressing.  She concludes the call as she sees her son, Joel, perk up from his sleep on the living room couch, awaiting her return.  He asks about her day. She tells him it is past his bedtime.  Obviously forgetting her birthday, Joel reminds her with a gift, a new watch, since she kept complaining about her broken one.  Although spent from a long days work, Sarah’s heart fills from this gift, and after a few laughs and some TV-time shared with Joel, she tucks him into bed. “Goodnight, baby boy,” she whispers.

This is how Naughty Dog’s zombie drama The Last of Us begins, except all is not what it seems; in the actual game, Joel is the parent, the playable character, and Sarah his child.  And in the ten minutes that follow, Sarah is killed and Joel is thrown headlong into a tragic quest of heartache and survival in an infected world.

Although she never existed, who could our role-reversed-Last of Us-Sarah have been if she was the true lead of the game: a single mother, worried about money, trying to balance a busy life, grieving the loss of a child, trying to physically and mentally survive in the midst of tragedy.  Both the mother and the breadwinner, she could have been a woman of depth, one who does not necessarily fall into an obvious role.  A woman living her life, and doing her best- she could be a friend, someone in town; she could have been anyone.

If there can be narratives about such a man in the central role of a video game, could there ever be a game about such a woman?

Women have played many roles in games, but the clarity of the stereotypes in which they are placed can be strong with one sided-qualities and physical attributes.  In her Tropes vs. Women series on Youtube, Anita Sarkeesian identifies such roles, and how they are problematic portrayals. And with the role of female players proactively changing and increasing, the issue of these— in many cases— unmoving tropes is particularly unsettling, especially in their extreme and caricatured nature.  The question of “where the women are” (as sociologist T. L. Taylor titled her book) is a relevant one, but where the real women are is a more pressing one.  In the midst of all the Manic Pixie Dream Girls, Straw Feminists, Ms. Males, and Grand Theft Auto prostitutes, where is the real woman in video games, and who is she?

So what exactly are we talking about?

Replaying the scene above and looking at Sarah again, one can see a woman with familiar qualities as she deals with familiar situations (finances, family balance) or concepts that are relatable to the player world (the grieving process, survival).  One can see through the character’s interactions an inflection that hints at a complexity striking in its reality (heavy sighs, posture, tone of voice).  Her attire is not exaggerated or distracting, but sensible to whatever she needed to complete.

From this example, and from patterns in other cases, what could be said about this woman is:

1. She feels familiar; a fully developed character whose moral foundation transcends the universe she is placed in, imaginative or not, as she deals with situations within the player space.  Nuances and inflection in her actions and words are present, and her depth creates dynamic relationships. She contradicts herself. She succeeds and fails and reckons.

2.  Her skill set is appropriate to her character and important/vital in gameplay

3.  Physically, she is pragmatically dressed for her role; the style fits the universe but also fits her person and her story.

With making this list alone, are we ironically creating a new trope?

Let’s refute this with a look at the “Strong Female Character” trope (as we can call it).  The woman we are talking about may overlap with, but should not be confused with this Strong Female Character, which has been the latest trend in mainstream media, especially in film.  The Hunger Games’Katniss Everdeen, Pixar’s Merida of Brave, Black Widow from The Avengers, and Alice of the Resident Evil franchise, and so on, are a few recent examples of this trend.  Accepted as a step forward both critically and by the general public, the problems of this role can go disregarded.  Strong Female Characters may work a weapon adeptly and hold their own in tough situations, but at the same time can possess trope-like qualities that undermine their potential.

Sophia McDougall puts it concisely and frankly in “I Hate Strong Female Characters:”

The Strong Female Character has something to prove. She’s on the defensive before she even starts….Nowadays the princesses all know kung fu, and yet they’re still the same princesses. They’re still love interests, still the one girl in a team of five boys, and they’re all kind of the same. They march on screen, punch someone to show how they don’t take no shit, throw around a couple of one-liners or forcibly kiss someone because getting consent is for wimps, and then with ladylike discretion they back out of the narrative’s way.

Much of her description can hearken back to many of Sarkeesian’s tropes from her video series, including the Smurfette Principle (“one girl in a team of five boys”), The Straw Feminist (“forcibly kiss someone because getting consent is for wimps”), and “sexy chicks doing dude stuff” (“couple of one-liners”).  Yes, these Strong Female Characters may be physically strong and seemingly prominent figures on screen, yet their trope-like foundations leech their potential to truly challenge tropes.  As Sarkeesian would say, this could be another case of  “squeezing [the woman] into the mold of the male action hero.”

McDougall concludes her piece with a thought-provoking list of what she would like to see in female roles:

What she is talking about is a character not tangled up in tropes or exaggerated ideals.  She brings together a list of qualities that create dynamic relationships with one another, that overlap or conflict when together, that include complex qualities on their own.  She is building a dimensional personality that feels human, and parallels the complexities of players.  As Lisa Nakaumara wrote in Menu Driven Identities “identities are multivalent”; not everything is one sided or lucidly comprehensible, and that is reality, especially when psychology, personality, and identity are involved in how everyone defines themselves.

As an aside, this is further complicated when the “create you own character option” is not an option in a video game.  Much talk in regards to female gamers could be said to revolve around MMORPGs and other games where avatars are self-made by players.  In “Where the Women Are,” T. L. Taylor discusses “the power of the avatar” for female players and how it “serves as the key artifact through which users not only know others and the world around them, but themselves.”  If this avatar is in fact so powerful, when that power (avatar customization is still limiting, but will nonetheless be more player specific) is taken away from players and put in the hands of designers working for publishers, an identity can be more so forced upon players or dictated in ways that can lead to tropes.  Because of this, it could be said that it is in the games where players have no options but to play one character is where female character design and narrative is truly tested.

The following three female game characters are drawn from such non-avatar-creating games. Through narrative, game/character design choices and patterns, they display qualities that could deem them real women in videogames.

The protagonist and main playable character of 2013’s movie-game Beyond Two Souls, Jodie Holmes’ story, could be considered a successful example from both the narrative and character design fronts (despite the mixed reviews).

Tied to a paranormal-like force named Aiden, the game is essentially a film that goes through Jodie’s life from toddler to her mid-twenties. She is thrown into a battle between herself, her powers, and the government out to use her to their advantage.  Since the game’s narrative is dictated by Jodie’s choices (leading to multiple endings), the player can take many paths through Jodie’s complicated and detailed story, as she searches for her identity in the midst of constant resistance.  Though it contains a supernatural element, Jodie’s humanity is the core dynamic; the player sees her tested by her professional and personal relationships (she can pursue romance if desired). You see her image of herself separate from Aiden’s force, and her spiritual-like struggle of understanding life after death through her abilities.

As one of the only women in the game, it could be said that Beyond: Two Souls also puts Jodie into conflict with the male presence that surrounds her and tries to control her (her doctors, mentors, and Aiden), as she quests for independence and a life she can be proud of.  Jodie makes mistakes throughout the game, but her general struggles and experiences are universal and familiar ones, and her reactions to situations (no matter which choice is clicked) are made with a deep sense of inflection and emotion.

Gameplay-wise, players can chose to be Jodie only, and her skillset contains her supernatural abilities (the only prime combative actions in the game) and her regular bodily actions.  In one section, the player/Jodie must cook dinner for a date, cutting vegetables, turning on the stove, and preparing the dining area (Playstation Trophies).  In anther scene, she is walking through a government facility and the player can “observe” certain aspects of the space.

As one plays through her life, they see that Jodie has a fairly typical upbringing and is a fairly average person, aside from the Aiden part.  She is not incredibly athletic or hyper-intelligent or a musical prodigy; she is not a regular girl by day and superhero by night.  The actions Jodie possesses as a character are fitting to what she can physically and mentally do, and are vital for furthering the narrative. 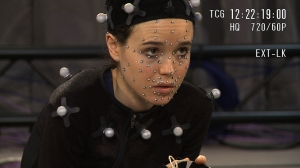 Physically, the use of Motion Capture technology for actress Ellen Page captures a truly human look and feel to Jodie; she is modeled after a living woman.  This significantly enhances the virtual Jodie through a wider range of facial changes and postures that provide further inflection and realistic emotional depth to her actions and reactions.  It also creates a figure whose parts are not exaggerated or idealized.  The porous skin and freckles on Jodie’s face, her imperfect hair, and the ugly sadness on her face when she cries is striking in its authenticity and rawness when compared to the extremes of the more satirical Bayonetta, for example.  Jodie is also relatively style-less (jeans, sweatshirts, sneakers, etc), an element of character design that could be considered rare especially when looking at female characters; whether she is out in a desert working on a farm, or working with the CIA, her clothing never appears impractical or distracting, and is appropriate for the present day the game is set in.